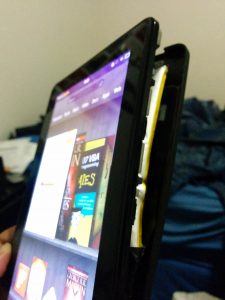 … well not exactly, but something is about to explode in it.

This morning, I found my Kindle Fire had gained a few waist sizes since the last time I saw it. Something had expanded inside the Kindle to the point that it has now separated the bezel. I’m assuming it’s the battery and a quick google search tells me this is a somewhat common issue. It’s the first generation Kindle Fire so it’s no spring chicken, but it still displays content really well and I was still reading books off of it.

The Kindle is now emitting a possibly toxic smell that reminds me of Super Elastic Bubble Plastic which you would only know if you grew up in my era.

What’s even crazier is that it still works and it still works well. If I was looking directly at the screen I wouldn’t know something was wrong with it. I’m assuming this might have been an issue for a long time but the expansion couldn’t break the bezel until now.

So now, I’m not sure what to do with it. I’m sure it’s way passed the warranty so I won’t be able to get it replaced. I’m not going to fix it because it’ll probably cost too much for a 3 year old tablet. And I think if I keep it around it will eventually explode.

Maybe I could use this as an excuse to get the new Nexus 9. Hmm…

It’s the end of the second day wearing the LG G watch.